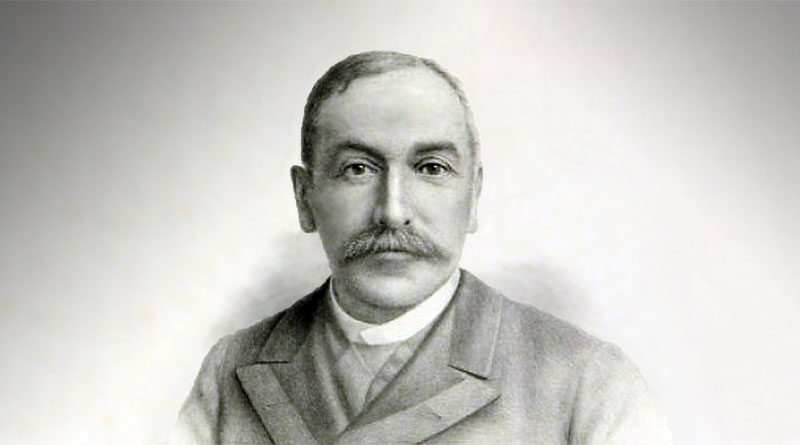 The fourth baronet left us the front elevation of the house, the fifth gave us the external stairs. The sixth, the Riding School and the tale of ‘Squirt’. The seventh took away the stairs, replacing them with the portico, as well as making considerable alterations inside the house. The eighth redesigned the Saloon and the church whilst the ninth completed the rural scene, with longhorn cattle and the sheep. The tenth? Perhaps not a lot, although the mere occasion of his birth gave us the glorious avenue of lime trees that his father planted to commemorate his arrival.

Born in 1846, he did not, like his predecessors, go to Public School and then University. He was educated at home by tutors and it seems, was free to roam the estate, indulging in the love of nature or, at least, the collecting of specimens. When he was thirteen, his uncle gave him a small nature book (with some very fanciful descriptions of animals) in which he noted his own comments in the margins, across the pages, criss-crossing them sometimes. I once spent a cold, but enjoyable, winter deciphering them.

For instance, it told of the Black Swan (in the yellow room) which was, in fact, shot near Barrow-on-Trent and the two Northern Divers (in the Bird Lobby) which were shot off Dawlish, from a boat!

In 1876 he married Isabel, daughter of Charles Bowyer Adderley who, two years later, was elevated to the rank of Baron Norton (Norton-on-the-Moor, North Staffordshire, in the constituency he had served in Parliament). By her, he had five children; Richard, Hilda, Winifred, Airmyne and Frances. Richard died before his father, in 1921, and the estate went to Hilda. Only Frances, who married Arthur William Jenney, had children and Hilda, when she died, willed that the estate went to Frances’ elder son, Charles. The title, of course, became extinct on Vauncey’s death.

(At that time, the title descended in ‘line male’. If Richard had lived to succeed, the title would, of course, come to him and, on his subsequent death, passed to the older succeeding, nephew.)

Vauncey’s somewhat irascible nature has been well documented; the removal of an inn because it was a haunt of poachers and the destruction of Repton Hall in a fit of pique, are good examples. He did, however, carry on the tradition of benevolence to the tenants although that did not extend, by and large, to his daughters. Richard, he indulged, but that latitude did not extend to the girls.  Winifred appears to have been on affectionate terms with him (see Celia Sanger’s work on ‘Wandering Winnie’ and ‘Winnie and Bertie – the True Story’) but Airmyne was banished from the house for smoking, going to live, apparently as a companion, with Judge Linley and his wife, in Derby and, later, on his retirement, going to live with them in Corfe, near Taunton. She did attend Hilda’s wedding, as matron of honour, in 1918 but we do not know if she stayed at the House.

Apart from performing the office of High Sheriff of Derbyshire in 1900, Sir Vauncey does not appear to have performed any public duty, but lived a quiet life, to his own rules, until the 1920s, when he was affected by arterio sclerosis (see Karen Mary Kreft’s profile of Grade Smith) from which he died in 1924.

Whereas the origin and track of the name ‘Airmyne’ is fairly easy, that of ‘Vauncey’ is somewhat more complicated. We know where it sits in the line of Crewe descent but its origin is obscure.

The only reference to the family that I can find is in Clutterbuck’s ‘History of Hertfordshire’ where it is stated that the heiress of William Creke was his niece, Johanna. She was the daughter of Edmund de Vauncey and Joan Creke, William’s sister.

The estate would normally have gone to her brother but he died ’on the feast of the Annunciation in 1396, just before the judgement was made.

The above is a simplification of what was quite a complicated legacy situation regarding the estate of Lockley (now part of Welwyn Garden City). This estate had been in the hands of the de Valence* family.

It may be sheer supposition to think that the name ‘Vauncey’ is a corruption of ‘de Valence’ but, in a time when things were written down as they were heard, stranger things have happened. In the pedigree drawn up by Rouge Dragon for Sir Henry, the 7th. Baronet, on his application for the restoration of the Barony of Crewe, it is stated that, after Edmund de Vauncey’s death, Joan married into the Mountchauncey^ family. Clutterbuck, however, states that she married Thomas Prior. It could be therefore, that the marriage listed in the pedigree is a third marriage.

*The name ‘de Valence’ was the family name of the Earls of Pembroke who held lands in Hertfordshire. They also held lands in Kent – Sutton Valence, not far from Maidstone , and that’s where we’ll catch up with Sir George Harpur (1503-1558)  who, it seems, was anything but a ‘quiet country squire’.

^Thinking of the altering of names over time the Mountchauncey family’s name came from ‘Munchensi’, which, in turn, came, through various translations, from ‘Monte Casino’, in Italy.

I would like to thank Sue Styche for her advice and help throughout this series of articles.