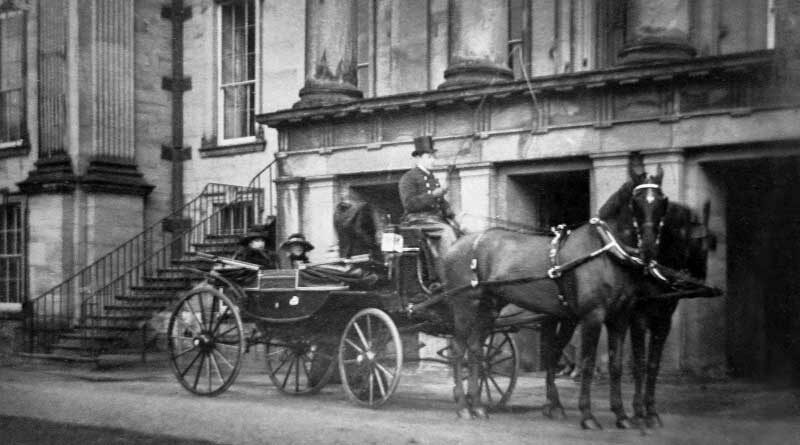 Up until the early years of the 20th Century, the only way to travel for an upper middle class or upper-class family was by horse and carriage. The demands for a good, experienced Coachman were high, but the role was so much more than just being able to drive a coach and horses.

Coachman came up through the stable yard ranks of Stableboy, Groom, and 2nd Coachman. It could be a highly dangerous job: coaches were often overloaded with baggage making them prone to turning over; horses, who were in teams, were often skittish, and of course, the roads were uneven, pitted and some, nothing more than cart tracks. Indeed Sir George Crewe’s coachman at Calke, William Shaw, had an accident in 1831 and died. And Sir Henry our 7th Baronet was killed in a coaching accident in 1819.

The Coachman was the man in charge of the stables. So Grooms and Stable boys etc. came under his authority. He would oversee the care of the horses and the care of the carriages but would delegate most of the work to the groom and/or the Stable Boy. If the establishment was large enough, they might employ a 2nd Coachman. If this was the case then, usually the head Coachman would drive the two-horse ( or more) carriage and carry out the more prestigious engagements, while the 2nd Coachman would drive the single horse brougham, for example, and got to do the ‘night jobs’ and driving to and from the station, etc.[1]

They also wore Livery, so had their uniforms bought for them.

Calke did have 2nd Coachmen, but not always, depending on the family circumstances. One coachman who typically rose through the ranks was William Goodall. He was born in 1823 in Uttoxeter, the illegitimate son of Ann Slater. She did marry Robert Goodall later that year, so William was given his surname.[2] Robert was a farmer and so William grew up around horses.

In 1851 he was living in a Palace. The Bishop of Bath and Wells’ palace to be precise. He was one of two grooms. He was aged 27 but consistently from now on took 5 years off his age.[3] He was promoted to Coachman while with the Bishop.

In 1852 the Bishop had to let William go as he had to give up his home, so William, on the lookout for another position applied to Samuel Bull’s Servant Registry in Derby, who recommended him for the position of Coachman at Calke. We learn a little bit about William from letters sent to Calke as part of his application. For example, Samuel Bull described him as ‘ 5ft 9” high and a little more than 9 stone in weight, smart, active, healthy-looking.’ And William himself wrote, ‘I am fully capable of undertaking your place – I have been driving and riding for years’ And then, someone on behalf of the Bishop sent a character reference. It speaks highly of his abilities as Coachman but adds ‘After he left he believes he went to ……..who he understands parted with him for having been intoxicated, but the Bishop believes there is much to be said in his favour. He fully believes this was an accidental case being from his long knowledge of him that it never was a habit.’[4] But this didn’t seem to put off Sir John, as William began his long association (28 years) with Calke as 2nd Coachman earning £23 per year rising to £28 per year when he was promoted to Head Coachman in 1859.[5] He left in 1880 to be coachman for a family in Stoke-on-Trent and for the first time gave his correct age in the census – 58.[6]

Just over 10 years later a local chap called Alvin Smith was starting his rise through the Calke Stableyard ranks. He was born in 1858 in the area of Repton priory and baptised at Ticknall. His father, John was a Lime Burner and a Quarryman. Alvin started working when he was 12 years old at the Brickyard.[7] Within the next ten years, he changed his career to become a Groom. He described himself as that in the 1881 Census, but I have no documentary evidence for him at Calke until 1899 when he was Groom[8] and then promoted to Coachman.[9] It would have been quite unusual to have a local as a Coachman as he would have been in a position where he might be party to private conversations. But it seems the family were well-liked and trusted as through the years, at various times, his son Arthur is Page Boy,[10] and one of his daughters, Isabella, at only 13 years of age is a Nurse Girl, employed at Calke to help look after one of the young babies.[11]

According to oral history, Alvin was often to be seen sitting in the back of the coach while Sir Vauncey drove. He was a much-respected servant, and when Vauncey died he was chosen to be one of the Pallbearers and Vauncey left him £100 in his will.[12]

Hilda kept Alvin ‘on the books’ even though in later years there were only rare carriage drives. In the 1939 Register, he was still living at Kennel Cottages with his daughter Olive and her family. He was employed as an Estate Labourer.[13] He died in 1940.

Of course, we can still see some of the carriages at Calke that William and Alvin drove and took such care of, now, of course, looking a bit worse for wear,  but it’s not a great leap to imagine them in all their shiny grandeur.