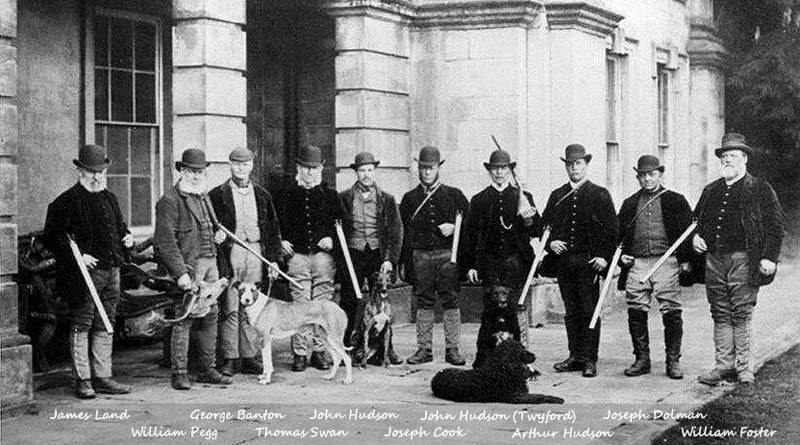 Gamekeepers have been needed ever since hunting for sport became popular. To begin with, it was all about poaching. For example, Henry VIII didn’t want anyone shooting his deer before he had to so he employed Gamekeepers to catch anyone who tried to.

Later it needed to be legalised so in 1671 an Act of Parliament allowed any gentlemen legally allowed to kill game to appoint a Gamekeeper, and later giving Gamekeepers themselves legal powers to confiscate guns and to search the home of any suspected poacher.

It was only when wealthy gentlemen started shooting flying game (it had been ground game before) that they also needed gamekeepers to breed and maintain a stock of birds.[1]

A license to enclose a deer park for Calke was granted in 1637, but the earliest document I have found that mentions a gamekeeper is 1703, a William Butterton.[2]

So how did you become a Gamekeeper? Well in the early days they came from agricultural labourers who already had a good knowledge of the countryside. One such chap at Calke was Joseph Dolman (see header image, from 1886). He lived in Ticknall and had 12 children.[3] He started by ‘nightwatching’ in 1851, which means basically watching the game birds at night usually to deter poachers. He was also a very adept Rabbiter. He is listed several times in the Account books for catching rabbits, for example, ‘280 couple’ (meaning pairs) and was paid £7.

By 1865 he is on the Gamekeeper lists as a Ferreter, helping to keep the rat and rabbit population down on the Estate. All this would have provided extra income on top of his regular work as a labourer, but later in 1865, he had been promoted to Assistant Gamekeeper, which would have been a full-time job, giving him a more regular income.[4]

There was a certain hierarchy in the gamekeeping world. Bottom of the pile would be the men like Joseph Dolman, nightwatching, rabbiting and killing rats. There were several regular Ticknall men who were paid 1d a rat, with some doing very well killing up to 120 at a time. The next step would be Assistant Gamekeeper, a full-time job working under one of the Beat Gamekeepers, the next step on the ladder. The Beat Gamekeeper would be put in charge of an area of the Estate (the Beat). For example, there were beats at Smisby, Swarkestone, Twyford and Pistern Hills. All of these would come under the management of the Head Gamekeeper, who in turn was directly responsible to the Landowner.

The Pegg family were Head Gamekeepers at Calke continuously from 1851 to 1963, passing the post from grandfather to son to grandson. William was a ‘foreigner’ from Norfolk appointed by Sir John around 1851. He and his family moved into Middle Lodge (eventually becoming forever known as Peggs Lodge).[5] In 1852 he was paid 15 shillings for rearing birds (this would have been on top of his weekly wage) and his son Augustus at only 12 years old is already cutting his gamekeeping teeth by being paid 10s for ‘care of birds’, no doubt helping his father.[6] Each gamekeeper had his own recipe on what to feed game birds. The Peggs’ involved boiled rice, boiled rabbit, boiled egg and scalded biscuit meal.[7]

Augustus left for a while to gain experience on other Estates, meeting Hannah, his future wife, at Hatfield House, Herts while they were both working there.

Augustus returned to Calke for the final time in 1891 when his father William died and he took up the reins of Head Gamekeeper. Unfortunately, it is short-lived as he died just 7 years later from complications from falling down a rabbit hole.[8]

And so we come to perhaps the most ‘famous’ Pegg, Agathos, who became Head Gamekeeper at the amazingly young age of 24. He was very well known in gamekeeping circles, all over the country, and indeed further afield. David Jones, who has written an excellent book on the History of Gamekeeping, mentioned Ag Pegg, unprompted by me when I was asking him a question.

He became Sir Vauncey’s right-hand man, in his pursuit of birds and animals to add to his collection, sometimes travelling all over the country with him. Sir Vauncey also added Butchery to Ag’s skills so that he could complete the whole process from killing the deer to skinning, gutting and jointing.[9]

His fame, however, came from the – not unconnected – pastime of rearing gamecocks. Cockfighting had been banned in England in 1835 but a lot of other countries still carried on the practice and Ag was known to sell birds to them. The local newspapers at the time are full of Ag’s success in local Game bird shows and he had a tableful of trophies to show for it.

One of the highlights of the year for Sir Vauncey was the shooting season when the family would decamp to Warslow Hall, their house on the Staffordshire moors for days of shooting. Even though there was a permanent Gamekeeper there, Ag would still travel up there on his motorbike and sidecar to supervise the proceedings.[10]

The Pegg Gamekeeping Dynasty at Calke came to an end in 1963 when Ag died.[11] There was a succession of Gamekeepers after that, but the profession was slowly declining. In 1911 there were 23,000 gamekeepers in the UK and after WWI there were only 10,000. During WWII, rearing gamebirds was prohibited and everyone had to cull pheasant and partridge stocks for food. Today there are about 3000 gamekeepers.[12]

Just an interesting bit of trivia as a footnote. I did a family tree when I researched Joseph Dolman and he had 72 grandchildren.

The Pegg Photographs are by kind permission of Roger Pegg.

Next article: The Coachman