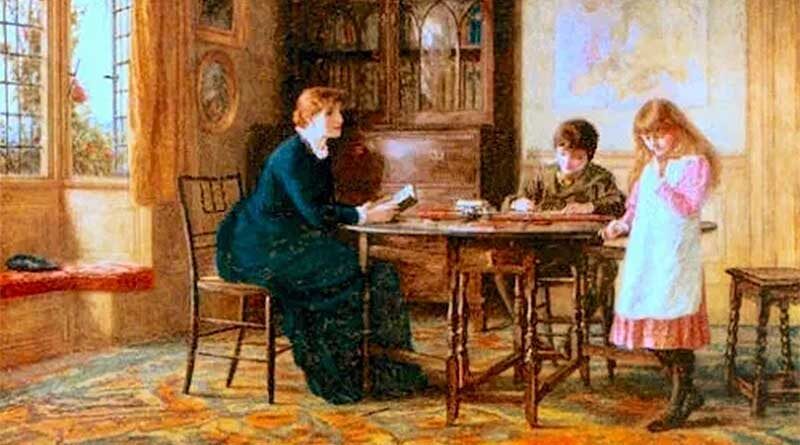 The Governess was almost always a well-educated, middle-class young lady. I would stick my neck out here and say that almost no middle-class lady chose to be a governess. In most cases, they were destined for marriage to an equally well placed young man, or daddy was rich enough to take care of them. However, the beginning of the 19th Century was marked by deep economic distress with bank failures and no Welfare State, meaning that some middle-class families found themselves almost destitute overnight. The young women who were not married found themselves having to look for work and one of the few occupations that were in any way ‘suitable’ was as a Governess or teaching in a girls school.[1]

Hunterina Horry was Governess at Calke for at least 2 years. She might have been there longer but the only documentary evidence we have for her is the 1901 Census Return and a newspaper cutting from 1900. She was born in Edmonton, Middx in 1862. Her father was a Ship Broker and they were able to afford two servants in 1871.[2] Hunterina (she gets her name from her mother, whose family boasted a selection of names from Greek Mythology) was one of 12 children and five of her sisters also went into education; three of them ran a girls school in Great Malvern Worcestershire and Edith also became a governess. So were these girls the exception to the rule? They were certainly well educated; ancestors included a School Master and a Professor of Languages.

Sometime after her 18th birthday in 1887, Hunterina was Governess at Brownsover Hall near Rugby. She appeared in the newspapers in 1887, having found herself in court after being assaulted by a man while walking from Brownsover to Rugby. William Blythe was found guilty and sentenced to 18 months hard labour.[3]

I have been unable to find her in 1891, but I suspect she might have been in America as her brother was working over there. She came to Calke sometime before 1900. She would have been employed as a finishing governess for Frances, aged 13, mainly, but also perhaps tutoring Hilda (aged 23) and Airmyne (aged 18). She would have schooled the girls in the fine arts of dancing, singing, drawing and playing the piano and, given the skills revealed later in life, I would imagine she would have taught languages too. She helped the girls, and Richard, with their drama productions as shown by this newspaper cutting from 1900. [4]

A Governesse’s position in the household was an awkward one and led to them being isolated. For example, Hunterina was socially inferior to the family, but above the other servants. She would never be invited to sit down to dinner with the family, but did not mix with the other servants, often having her meals served to her in the schoolroom. The servants tended to dislike the Governess, because they were expected to be deferential to her, despite the fact that she was a paid employee just like them.

In 1901 an advert appeared in the Times showing that perhaps Hunterina’s usefulness was coming to an end at Calke. [5]

She, in fact, got a temporary position accompanying a young child to New York (as mentioned in one of Richard’s diaries.) [6]

We find that she has moved to America by 1903 as she was married in that year to Benjamin Julian, a lawyer from Chicago. She was 40 by then, so no children followed. She became a linguistic teacher and continued until her husband’s death in 1936,[7] when she returned home to Cheshire, where she died in 1956.

Governesses often struck up close friendships with the children they taught; after all, they would spend most of the day with them. One such attachment at Calke nearly caused great embarrassment for the family. Sarah Adams was a governess employed at Calke around 1896, before Hunterina, possibly as a temporary post providing tuition in some specific subjects.[8] She formed a close friendship with ‘Freddy’, as Sarah called her (we don’t know whether this was Hilda, whose second name was Ethelfreda, or Winifred) and when Sarah left they exchanged fond letters to each other. It was these letters which almost had Vauncey and Isabel appearing in court.

Sarah took subsequent employers to court for wrongful dismissal and payment of wages due. There was a possibility of Vauncey and Isabel being called as character witnesses on behalf of Sarah, based on the letters she had in her possession. In the end, the letters weren’t used. The court case did unveil, however, the tissue of lies that Sarah had told, including false qualifications and references and calling herself Sarah A’Court. She also tried to bribe a ladies maid with £100 to lie in court for her and it was this perjury that got her sent to prison for 18 months hard labour in 1900.[9] That was only the first of several appearances in court, usually instigated by herself, winning £850 (£50,000 today) for personal injury in a road accident in 1915 in very dubious circumstances.[10]

There are letters in the Calke Archive from Sarah to Vauncey after she was ‘let go’. It is evident by the wording of the letters that she was unhappy at being dismissed, but they give no clue as to the reason for the dismissal,[11] although newspaper reports in a couple of other court cases described her as rude and disobedient, and in later life as ‘a very eccentric woman. I think the family at Calke probably got off quite lightly, considering.

Next article, The Cook