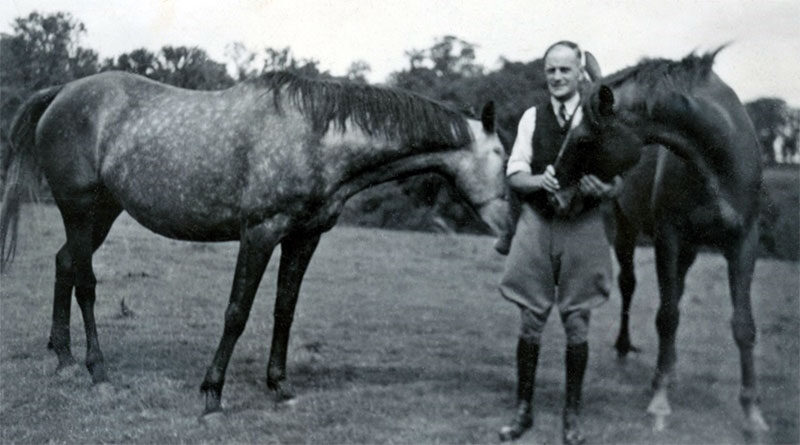 The stables and stable staff at Calke have always been an important part of the Estate. Not only because before combustion engines, horses were the only way to travel long distances in a comparatively short time, but also because for a period of time in the 18th Century Calke ran a very successful race-horsing stable. In those days the stables would be bristling with staff. Head Coachman, 2nd Coachman, Postillian, Head Groom, Stud Groom, Groom, Stable boy etc. Each role required specific skills and a similar, and strictly adhered to, hierarchy like the house servants.

The Groom wasn’t the most highly paid but arguably was the most important servant in the stables. He was responsible for the everyday welfare of all the horses, making sure they were in peak condition at all times.

The Groom’s duties would keep him busy all day. Up early in the morning to muck out the horses, feed and groom them. Exercise them if they were not being ridden or driven, riding out with members of the family, perhaps teaching younger members of the family to ride, and bedding down the horses at night. If any member of the family was out in the evening, he was expected to wait until they came home, to deal with the horses.[1]

A good groom was also able to treat horse’s ailments, usually with home-made, tried and trusted medicines, but also know when a vet needed to be called. They also attended when horses gave birth. At Calke they had a special loose box where horses would be put to give birth. A window in the wall enabled the groom to keep watch, without disturbing the mare in labour. The same applied to the farm’s Shire Horses. A narrow corridor above the Shire Horses Stables allowed the groom to keep an eye on any of them in labour, and because the boxes were not large enough for the Shire to give birth, the groom had to know exactly the right time to move the horse to the Round House (you can still see this next to the car park) in order to give birth.

The grooms at Calke came and went on a regular basis, very often moving for promotion. An exception to this was Francis Peace, who served the family for at least 55 years as groom.

Francis was born in 1775 in Church Gresley, the eldest of William and Elizabeth’s six children. I believe he was working at Calke by 1799, because he married Jane Hill in Ticknall on the 17th December of that year.[2] He first appeared in the Calke Records in 1808.[3] By then they’d had 3 daughters.

1811 is when he is first mentioned as Under Groom, and by 1819 he had been promoted to Groom earning £25 per year.[4] One of a groom’s jobs was to collect or deliver horses when they had been bought or sold, or to deliver post-horses to locations where the Calke Carriage might need to change horses on a long journey. We have several examples of Francis’s travel expenses for these journeys including Tolls, 2 days board, wages and horseshoes.

Sadly in 1824 Jane died and because she was a Baptist she was buried from Melbourne Baptist Chapel as there wasn’t one in Ticknall at that time.

As Francis came towards the end of his life there were a few entries in the Stewards Account books that really show how much he was loved and respected. Throughout 1853 and 1854 Sir John continued to pay Francis’s wages even though he was 77 years old and, it seems, quite ill. Not only were his wages paid, but Sir John also regularly paid Sarah Marshall, a schoolmistress who lived in Calke Village to ‘attend to Francis Peace’.[7]

Francis died at Calke in 1855 and was buried at St Giles, next to the family plots. Sir John paid for an impressive headstone which reads

‘Sacred to the memory of FRANCIS PEACE who departed this life at Calke Abbey d. January 26th 1855 in his 80th year. This stone is erected by Sir John Harpur Crewe Baronet in grateful remembrance of the long and valuable services of an old and faithful servant of his family for three generations.’

One of the responsibilities of the Groom was to keep all the saddles, bridles and tack in good condition. A later groom who took great pride in keeping the tack in immaculate condition was George Miller.

George was a local boy, born in Ticknall in 1892. His father William was from Ashby but his mother was a Ticknall Topliss. He was the eldest of 5 children. However, tragically only George and his sister Katherine survived into adulthood. Their 3 siblings all died before they were a year old.[8]

In 1916 George married Lettie Peat in Melbourne. Her father Frank and brothers and sisters all worked in the booming shoe industry there, but Lettie was a Hosiery Machinist. Just 3 months after they married, their daughter Kathleen (but always called Jessie) was born. Their only other child, Dorothy was born in 1920.

I don’t know when George came to work at Calke, but in 1939 they were living in the flat above the stables and George was the Groom.[11] The work hadn’t changed much from Francis’s time; there was just less of it.

Because George worked at Calke for such a long time, we have accounts from living people who remembered a neat and tidy man who was always very thorough and took great pride in his work. Even though in later years the carriages were rarely used, he always kept them polished and maintained. The number of horses dwindled until he just had Airmyne’s horses, Seagull and Scarlett, and Henry’s horse, Boxer to look after.

After Airmyne had her riding accident in the early 1940’s, he took especially good care of her, and always accompanied her when she started to ride again.

Eventually, they moved out of the flat and into Ticknall. When Ag Pegg, the Gamekeeper was failing in his last months George used to call at Middle Lodge every morning on his way to work and light the fires for him.

Next article: The Gamekeeper