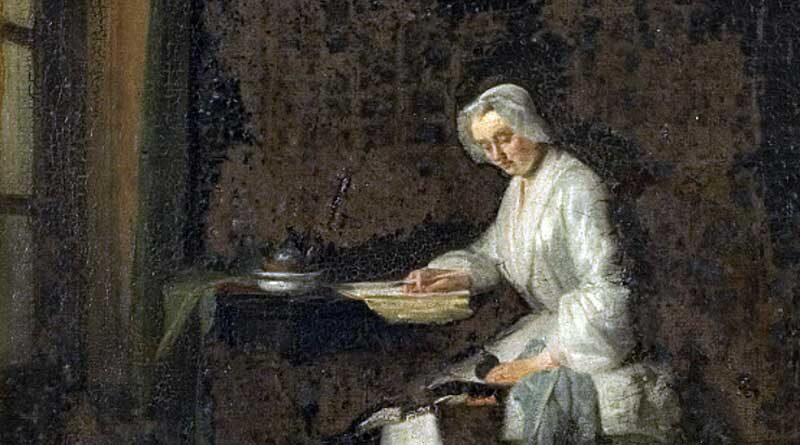 If the Butler was the outward sign of a house organised and well run, the Housekeeper was the engine who kept everything running. In my opinion, even though they were paid less than a Butler, the housekeeper had more responsibility.

To become a housekeeper you needed experience in one of the lower ranks of service. The usual route to a housekeepers position was either a housemaid, Ladies maid or Cook. It was the pinnacle for a woman who had chosen a life in service.

A servant manual from 1825 states that a housekeeper “ought to be a steady, middle-aged woman of great experience in her profession, and a tolerable knowledge of the world. In her conduct, she should be moral, exemplary, and assiduous, as the harmony, comfort, and economy of the family will greatly depend on her example.[1]

She was never married (although you could get away with being a widow so long as you didn’t have any children.) A husband, and/or children would be a distraction to the running of the household. She was however always called ‘Mrs’. The family and the servants would address her in this way, although the lower servants might be encouraged to call her ‘Madam’.

An exception to this at Calke was Harriett Phillips. She came to Calke in 1865 with at least 15 years experience as a cook and then housekeeper for two men of the cloth, a Rector and a Reverend.[2]  She also came with a secret. She had an illegitimate child, Samuel,[3] who she had hidden from previous employers, and although he was grown and working by the time Harriett was here, I am absolutely convinced she would not have told anyone about Samuel. One of the responsibilities of the Housekeeper was the discipline and moral welfare of the female servants. You can imagine how it would have affected her superiority if the female staff had known that she had had a child out of wedlock. She remained at Calke for 18 years so was obviously a highly respected servant and very good at her job.[4]

Harriet was also the exception to another rule, in that Housekeepers were expected to be fairly well educated as they needed to keep detailed account books, for one thing, but they also needed to know how to act and behave in front of guests of the same social standards as the family they worked for. The Housekeeper was one of the few servants who dealt directly with the Mistress of the house and occasionally guests. Harriett was in service by about the age  of 13 and on Samuel’s birth certificate she has signed with a cross, indicating that she was illiterate. Her account books (of which we have an example in the Calke Archives) are beautifully written[5] and I think that maybe one or both of her previous employers had taught her to read and write.

If the Housekeeper was the engine then the Housekeepers room was the engine house. Here she would balance the books, interview hopeful female servants (or dismiss them)and meet any tradesmen. She was in charge of the store cupboards, anything from beeswax to brushes, and the Linen closet. At Calke this room is on the first floor with a large fireplace and lovely wood panelling, demonstrating her status in the household. Off that room (and the only entrance to it) is the Linen Closet. She would be expected to buy all the linen, stock take it, care for it and store it properly. Usually 3 grades of linen, best, family and servants. It was expected to rotate linen to get even wear and ‘demote’ worn linen to the next grade.

Harriett French was another long-serving Housekeeper at Calke, although she brought no secrets with her, that I can find anyway. She was born in Stretton-Under-Fosse, Warks in 1859 into a family of Agricultural Labourers, although her brothers soon found more lucrative and permanent work building the railways.[6] The first evidence we have of Harriett in service is in 1881 as Stillroom Maid in Gloucestershire[7] and in 1891 in Staffordshire.[8] A stillroom maid would not have been her first role, she would have started as possibly a scullery maid.

She came to Calke in 1898 (possibly before) and remained for at least 21 years.[9] Even though she didn’t wear a servant’s ‘uniform’ she would have been recognisable as the Housekeeper by the set of keys hanging from her belt. Her principal role was supervising the cleaning of the house and would organise the housemaids’ complicated rota for cleaning all the rooms whilst avoiding the family. When the family were away, for example, on holiday, or at Warslow Hall for the shooting season, Harriett would organise the big spring clean of the house when items like curtains, carpets etc would be taken and given a thorough clean. The whole house would be spick and span from top to bottom. So well respected was she that Vauncey left her £100 in his will.

She retired and went back to Stretton-Under-Fosse and died there in 1926.

Next article, The Governess